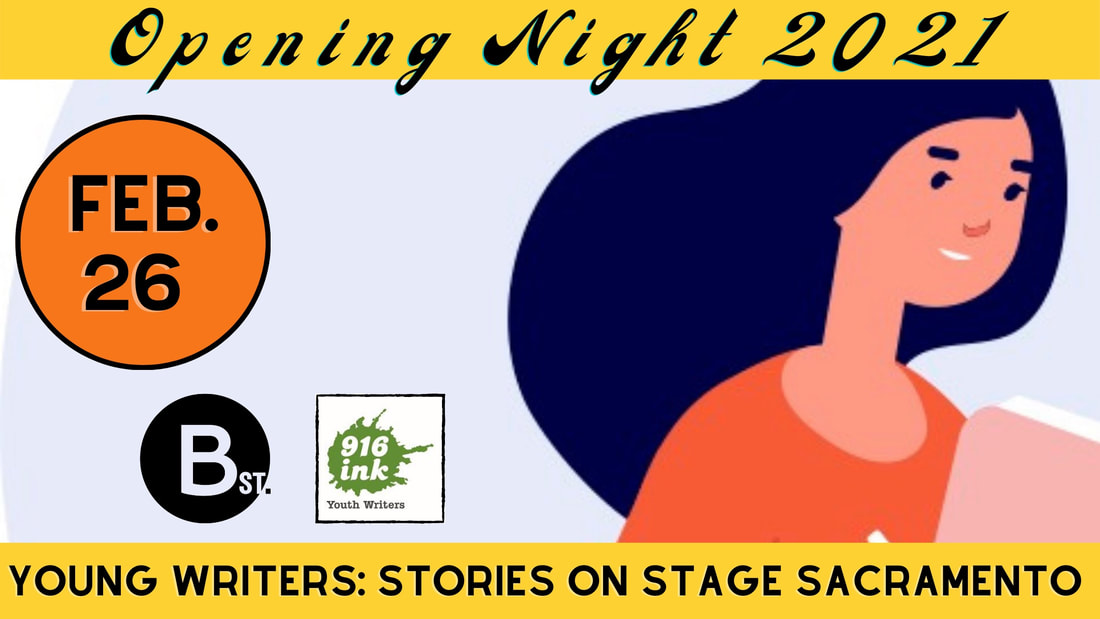 OPENING NIGHT 2021 PERFORMANCE--916 Ink, B Street Theater and Stories on Stage Sacramento
We were thrilled to see young poet Amanda Gorman perform her work at the inauguration and the SuperBowl. Now we can join up to support youth creators in our own home town. We hope you'll join us for an exciting Opening Night 2021. We couldn't be more proud to present Young Writers: Stories on Stage Sacramento, in partnership with 916 Ink and B Street Theatre, 5:00 on February 26. 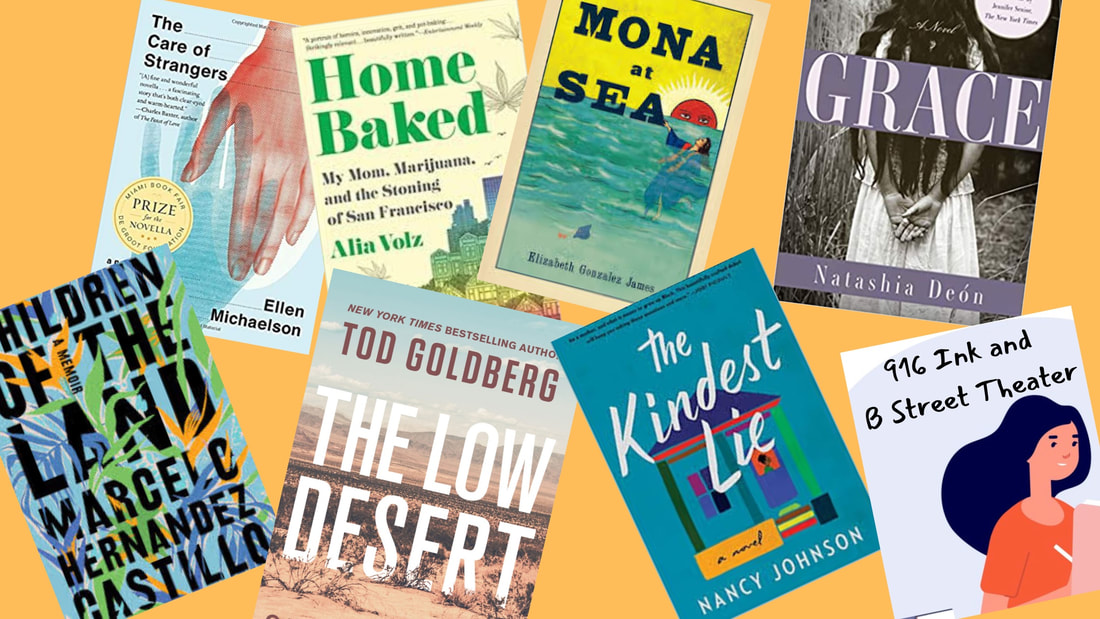 Our 2021 Season
Of course we'll begin with our special opening night partnership with 916 Ink and B Street Theater, described above. Then you'll see work performed by authors Ellen Michaelson, Alia Volz, Nancy Johnson, Tod Goldberg, Elizabeth Gonzalez James, Natashia Deon, and Marcelo Hernandez Castillo. Also, Stories on Stage Sacramento is publishing a fantastic collection of stories--TWENTY TWENTY: A STORIES ON STAGE ANTHOLOGY. Some of the authors in that anthology will be featured in an online launch party in June. (Below, you'll find a link to a performance of five TWENTY TWENTY authors to announce the anthology.)

​Actor Brennan Villados is based out of Sacramento, California. His most recent acting credits include in The Picture of Dorian Gray with Freefall Stage, A Soldier’s Play with Celebration Arts, and Marat/Sade with Falcon’s Eye Theatre. Brennan made his directorial debut in 2019 with Romeo and Juliet for Freefall Stage’s Shakespeare in the park. He attended The American Academy of Dramatic Art and has worked for the UC Davis School of Medicine Standardized Patient Program for the last six years. His other favorite roles include Mercutio in Romeo and Juliet with Falcon’s Eye Theatre, Patrick Stone in Inventing Van Gogh with Big Idea Theatre, Eddie in Fool for Love, and Tom in the one-man show Poster of the Cosmos, both for Blank Canvas Theatre. He is delighted to be a part of this production and looks forward to discovering new ways of connecting and storytelling in this unprecedented time.

Actor Atim Udoffia is also a director and teaching artist working in theatre, film and video. Recent theatre credits include MACBETH (Sacramento Theatre Company), THE ROYALE (Aurora Theatre Company), ZENITH (SF Playhouse), THE TEMPEST (Sacramento Theatre Company) and DISGRACED (Capital Stage). Her directing debut of OTHELLO at Big Idea Theatre was well- received, and has since directed several original works for theatre, including a staged reading of THE DRILL at Capital Stage. Also a writer, Atim's Creative Nonfiction piece "Woman in Question" was selected First Runner Up by the Los Angeles Review in 2018. At the moment she is working on a short film script. After earning a cross-disciplinary degree in Human Biology from Stanford, Atim went on to complete the post-graduate drama program at the London and International School of Acting. While living in Los Angeles for several years, she studied with Judith Weston and performed in a number of plays, short films and dance-theatre productions. Atim currently teaches SEL Theatre to elementary and high school students with Northern California School of the Arts and the East Bay Center for Performing Arts.

Author Kevin Sharp is a lapsed screenwriter and current comicbook industry reporter. Despite all the excitement since, his childhood dream of working with apes still sounds like maybe the best gig in the world. Find more of his writing at kevinsharpwriter.com

Author Maia Paras Evrigenis writes and teaches in Sacramento, CA. She received her MFA from CalArts and BS from NYU Steinhardt. Maia writes fiction novels and short stories with a focus on the body and illness. She is currently pitching her first novel titled Neon Jane, a story about a character from a young adult book about cancer a decade after they’ve finally beat it.

Author Elison Alcovendaz's work has appeared or will be appearing in The Rumpus, Psychology Today online, The Santa Monica Review, Ruminate Magazine, under the gum tree, and other publications. He received an MA in Creative Writing from Sacramento State and was recently selected for inclusion in the Best Small Fictions 2020 anthology. He lives in Sacramento with his wife and daughter. To learn more, please visit: www.elisonalcovendaz.com.

Author Deborah Pittman holds BS and MA degrees in music performance from the Brooklyn College Conservatory and has done doctoral studies at the Manhattan School of Music. She’s Professor Emeritus after 23 years as Professor of Clarinet and Musical Theatre at California State University, Sacramento. Ms. Pittman played second clarinet with the Sacramento Symphony, (1981 to 1990), as well as with the Brooklyn Philharmonic, the State Symphony of Mexico, the Orchestra of New York, the Dance Theatre of Harlem, and pit orchestras of musicals on Broadway.  She was Artist in Residence for the Sacramento Light Opera Association’s Theater Education Project and Artist in Residence at the Crocker Art Museum, where her multi-media work, Small Shoulders/Big Dreams, was created to support the 2013 Norman Rockwell American Chronicles touring exhibition. She received a Creative Economy Pilot Project Grant from the Office of the Mayor, to create this work. The Sacramento Regional Community Foundation awarded her trio,  MOD Artists, a “Transforming the Creative Economy,” grant  to create a three-part documentary on the history of Oak Park. Each event included a short film as well as live music.

Author Diane Kallas has trouble finishing projects which explains all of this: her interest in the flash fiction form,  her status as a fallen-away Catholic, retired technical writer, non-practicing attorney, amateur upholsterer, and also the piles of clean, unfolded laundry that decorate her home. Kallas's tragic-comic work has been featured at past Stories on Stage Sacramento events to great audience appreciation.
Read the latest SOSS blog post for Sue Staats' Q & A with our featured young writers from 916 Ink
and our youth performers from the B Street Theater's Young Actors Workshop!
AND
Stay tuned for updates on our SOSS TWENTY TWENTY Anthology
40 stories from Northern California authors, including from SOSS friends and alums Karen Bender,
Joshua Mohr, Pamela Houston, Anita Felicelli, Debra Gwartney, Sands Hall, Peter Owner and Joan Frank
2020 SEASON

Visit and subscribe to the Stories on Stage Sacramento youtube channel for recordings of 2020 performances! Sign up to receive our newsletter for announcements of upcoming performances, workshops and more!

Stories on Stage Sacramento In the News